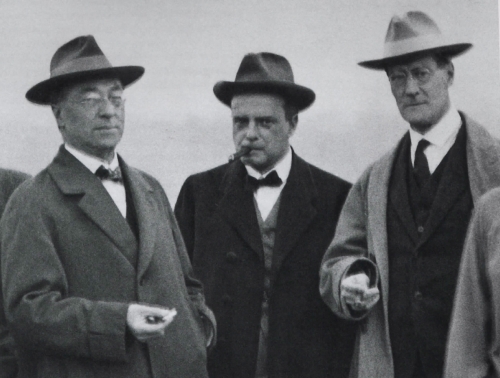 (left to right) Wassily Kandinsky, Paul Klee, and Lyonel Feininger on the rooftop of the Bauhaus in Dessau, 1926 (detail of photo of all Bauhaus masters)

1866
Born December 4 in Moscow to Wassily Kandinsky, a tea merchant from East Siberia, and Lydia Kandinsky.

1871
His family moves to Odessa. Parents divorce and his aunt becomes his caregiver.

1886
Studies law, economics, and ethnography at the University of Moscow.

1889
Folk art of northern Russia makes lasting impact on him. Visits Hermitage in St. Petersburg and sees paintings by Rembrandt for the first time. Travels to Paris.

1893
Submits dissertation, "The Legality of Laborers' Wages," and receives Ph.D. Appointed teaching assistant to the law faculty of the University of Moscow.

1896
Sees one of Claude Monet's Haystacks at an exhibition in Moscow; the experience motivates him to become an artist. Moves to Munich to study painting.

1903
Organizes seventh Phalanx exhibit, including sixteen paintings by Monet. Spends the summer visiting German towns with Münter. Phalanx School of Painting closes due to lack of students. Publishes Poems Without Words in Moscow.

1904
Befriends Alfred Kubin, whose work is featured in the ninth Phalanx exhibition; tenth, eleventh, and twelfth, and last Phalanx exhibitions; the group disbands shortly thereafter. Travels to Holland and Tünis with Münter. Separates from wife, Ania. Participates for the first time in Salon d'Automne and in "Les Tendances Nouvelles" exhibitions in Paris.

1906
Moves to a suburb of Sèvres with Münter. Works on woodcuts for Xylographies. Awarded grand prize at Salon d'Automne.

1908
Spends first of many summers in Murnau, a town in the foothills of the Bavarian Alps, with Münter, Jawlensky, and Werefkin.

1913
Exhibits at the Armory Show in New York. Composition VII is completed.

1914
Solo exhibition at Moderne Galerie Thannhauser. Flees to Switzerland with Münter at the outbreak of World War I. Returns to Moscow where he lives until 1921.

1919
Helps to found the Museum of Pictorial Culture in Moscow; becomes its first director.

1927
Rekindles friendship with Schoenberg in Austria.

1936
Participates in Abstract and Concrete exhibition at Lefévre Gallery, London, and Cubism and Abstract Art at the Museum of Modern Art, New York.

1937
Many of Kandinsky's works in German museums are confiscated by Nazis; several included in Degenerate Art exhibition, Munich.

1941
The Kandinskys are invited to emigrate to the United States; they decline.

1942
Paints last large canvas, but continues to work, mostly in watercolor and gouache.